Warning: count(): Parameter must be an array or an object that implements Countable in /homepages/26/d520205661/htdocs/clickandbuilds/WordPress/travelerslittletreasures/wp-content/themes/wpex-twenties/functions/meta/init.php on line 755
 Exploring Buenos Aires by Bike with Biking Buenos Aires + a Discount Code for you - Traveler's Little Treasures 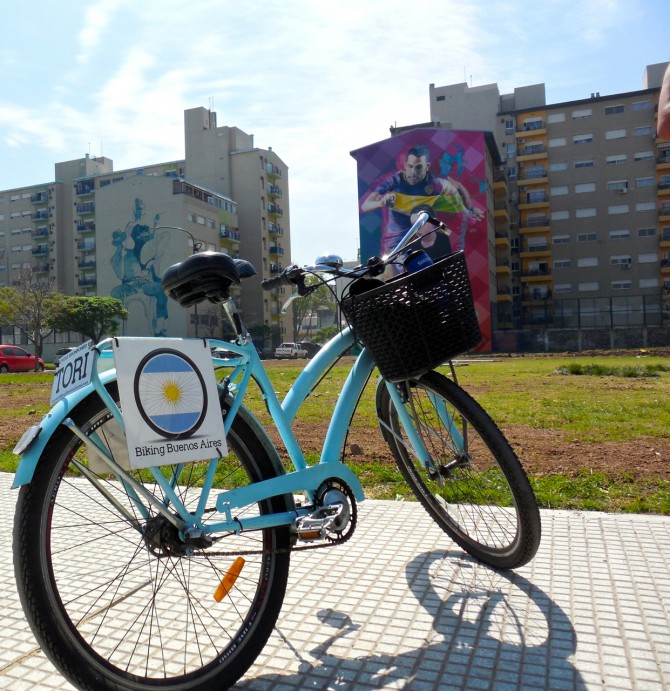 When I saw in my roster that I was flying to Buenos Aires I was pretty excited. Besides Brazil I have never been to any other countries in South America, so this was going to be a first. First time in Argentina, first time in Buenos Aires. I always wanted to visit and see the city and now this was finally coming true. My knowledge of Buenos Aires was pretty limited- I knew that the European influence is pretty visible in many aspects and because of its stunning architecture and cosmopolitan atmosphere Buenos Aires is often called the „Paris of South America“. Oh and I knew that the city was pretty big. Coming to Buenos Aires for the first time I wanted to discover as much of the city as possible. I was surprised to find out that one of the best ways to experience the city was actually by going on a bike tour in Buenos Aires. The city is big, but also very flat and filled with bike lanes& public parts and on the weekends there is almost no traffic. I probably would have done a hop on, hop off tour, but I am so glad that I found out about Biking Buenos Aires and opted for the bike tour instead. It is the perfect way to see the city because it gives you the freedom to stop everywhere you like, ride through small streets and in beautiful parks plus you get some fresh air and it is more active than just touring the city by bus. 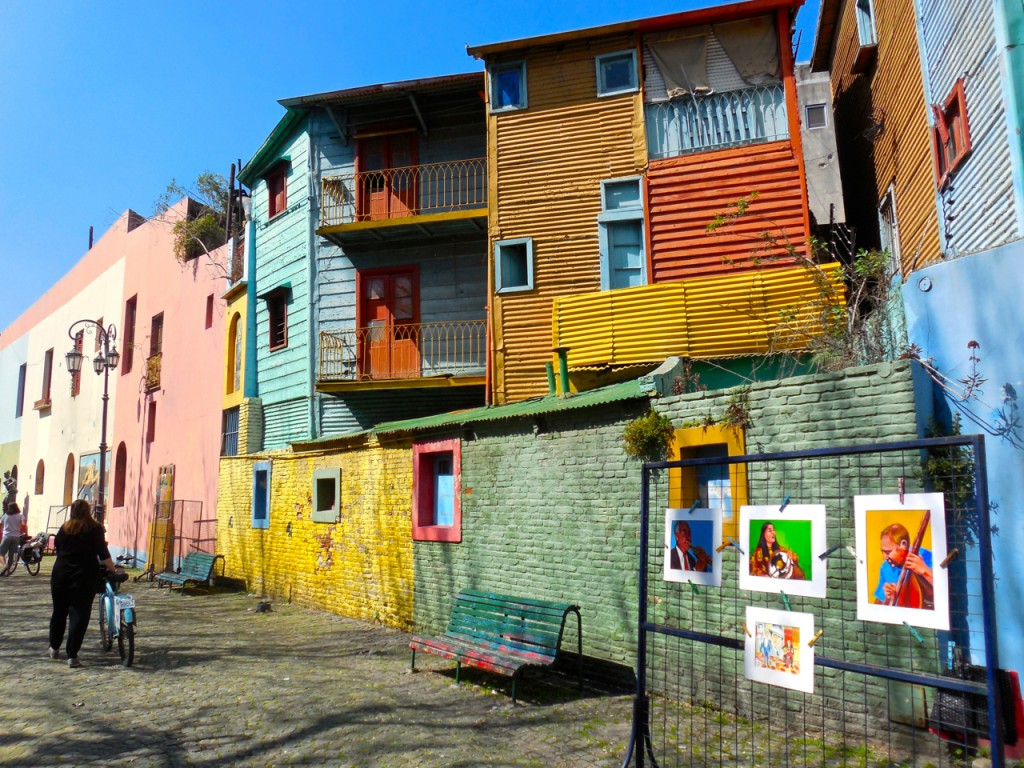 My Experience with Biking Buenos Aires 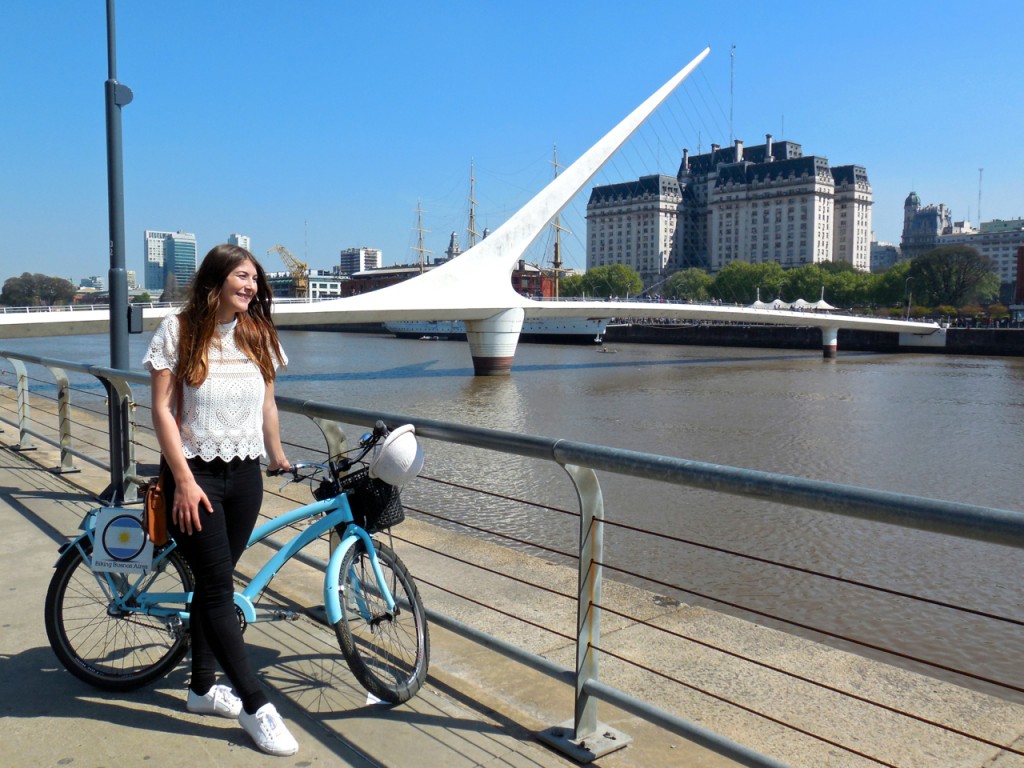 Biking Buenos Aires offers a variety of different tours. They offer three different Buenos Aires sightseeing bike tours: „The Ultimate City Tour“- a 7 hours long tour covering it all (south and north city), a „Heart of the City Tour“ (south city) and a „Park & Plazas Tour“ (north city)- both of them take 5 hours. Those bike tours are perfect if you come to Buenos Aires for the first time and want to get to know the city.

They also have themed tours such as a „Hidden Graffiti& Urban Art Tour“, The Architecture Tour“ or if you want to escape the city you can „Bike& Kayak in Tigre“. In my opinion those tours are great for people who have done some sightseeing in Buenos Aires before and want to get to know Buenos Aires from different perspective. Even if you say you know the city, you will see spots that you haven’t seen before and learn something new about Buenos Aires.

As it was my first time in Buenos Aires, I decided to go on the Ultimate City Tour on the day I arrive as it covers all the highlights of the city and explores different neighborhoods such as Recoleta, Retiro, La Boca, Puerto Madero, San Telmo, Micro Centro, Congresso and Montserrat. Basically it covered all the things that were on my to do list for Buenos Aires and beyond.

I always like to join some kind of sightseeing tour on the first day when I am visiting a city for the first time. This way I already get some information about the city, see the sights and get a general idea of the city. After that I usually do some exploring on my own, revisit the sights that interest me and I find it easier to navigate after a tour.

The meeting point for the tours is in their shop in San Telmo. The bike tour started at 10 am, but before our tour guide introduced himself and explained a little bit about the tour and what was awaiting us. We got to pick our bike for the day- you can choose between city-cruiser, mountain bike or bamboo bicycle and received a very stylish helmet and a water bottle. They have mosquito spray and sunscreen at the shop in case you forgot to put some on and you can use the restroom or log in the wifi before going on the tour. Included in the tour is also lunch, unlimited water, mate tea and snacks and a rain poncho- just in case. 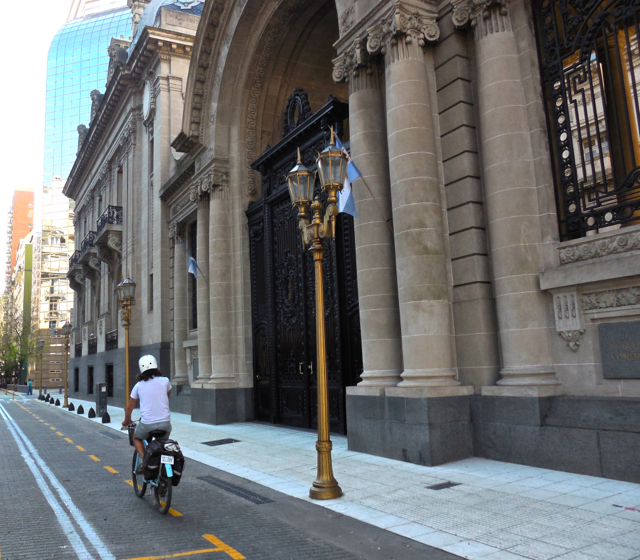 Our bike tour of Buenos Aires started by taking us through the backstreets of one of the oldest barrios of Buenos Aires and our tour guide was pointing out a lot of different interesting things on the way. We stopped at the border of La Boca and San Telmo for a quick history lesson about the city and the district we were in. Throughout the entire tour our guide had many interesting stories and information to share with us about all sorts of topics from history over to politics, things to do or food to try in Buenos Aires. I learned a lot, but it was never boring and I never got the feeling that our guide was just sharing information with us that he learnt from wikipedia. You could truly feel that he was passionate and loved his city and gave the tour his own personal touch. 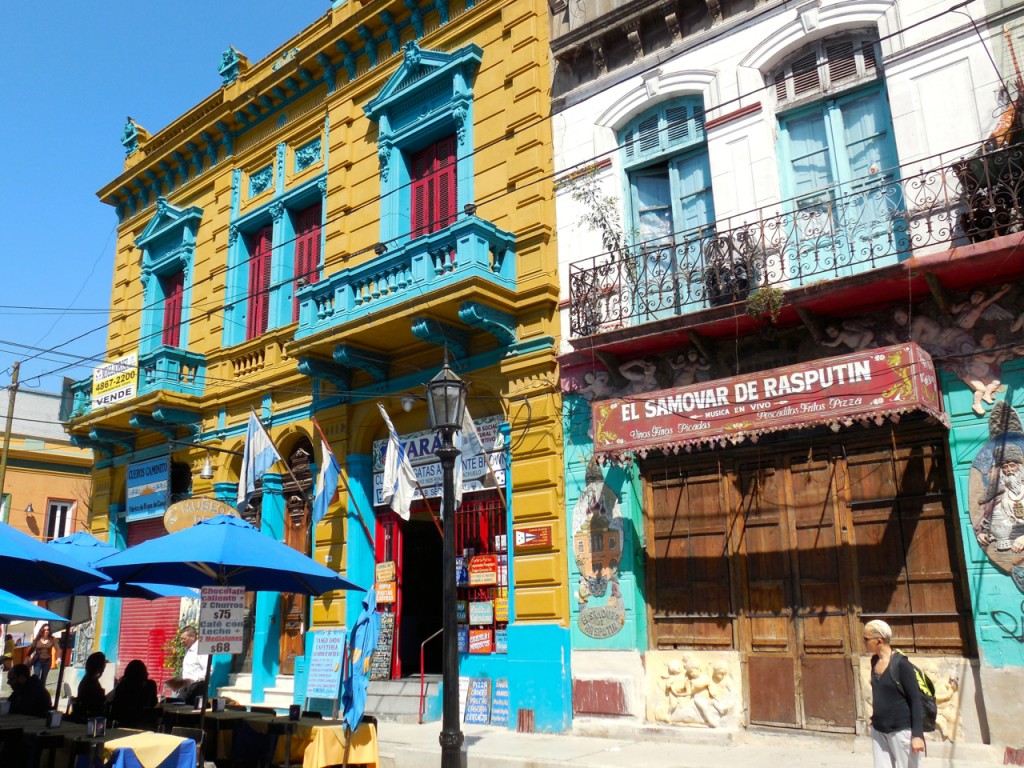 We continued our tour in colorful La Boca, probably one of the most famous districts of Buenos Aires and perfect for capturing photos. We walked around the touristy part that everyone has seen on postcards before and then continued on to a more local area of La Boca. We stopped aside the football stadium and our guide handed me an empty bottle and a knife. „Can you cut it in half?“, he asked. I was surprised but asked what he asked me to. He pulled a bottle of coke, ice cubes and Fernet Branca out of his backpack. He explained to us that many consider Fernet the national liquor of Argentina and „Fernet con coca“ is actually a very popular drink to have together with friends before a football game. He poured it in the bottle that I prepared, that know served us a glass and asked us to try the drink and to pass it along. The first sip that I took made me shiver, but after a few more sips it actually did taste quite nice. Know I also understood the concept of Biking Buenos Aires: We didn’t just bike around the city, we actually got experience it like a local. 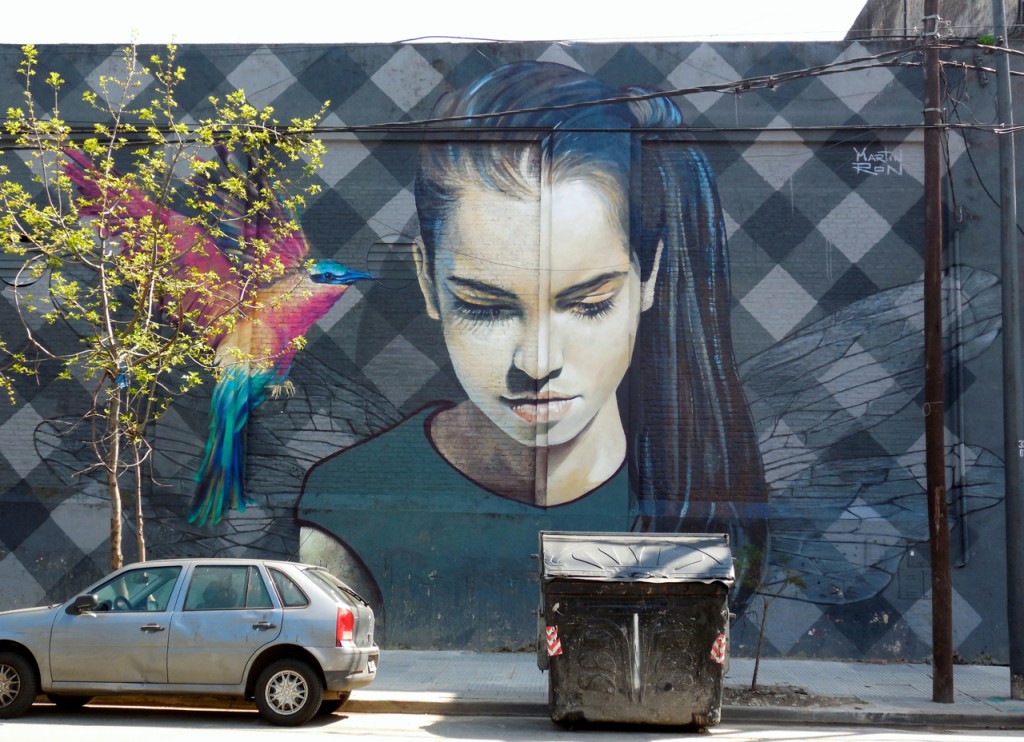 We cycled past some amazing graffitis and street art, through an Ecological Reserve and stopped there for lunch. Along a promenade there are many food trucks and tables were locals were sitting and enjoying food and drinks with their families. It was a Sunday and a visit to the Ecological Reserve is popular leisure activity. Our guide told us that we are going to have a life changing sandwich at his favorite food stall and he wasn’t promising too much- it was absolutely delicious. The tour is worth the money for the sandwich alone 🙂 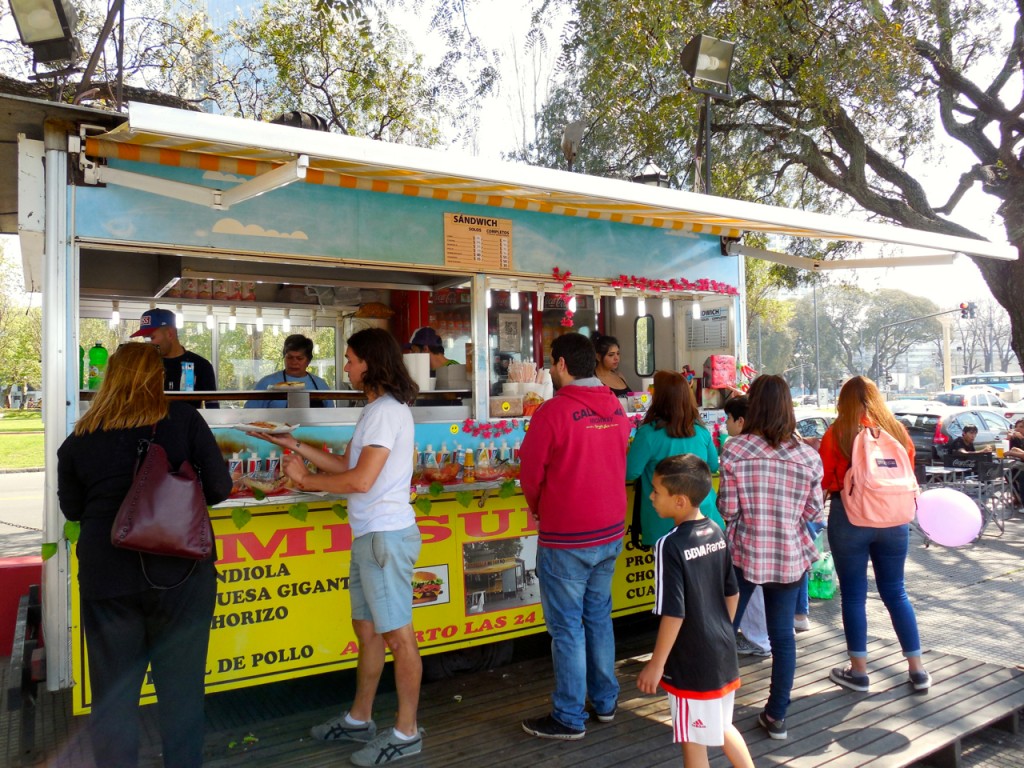 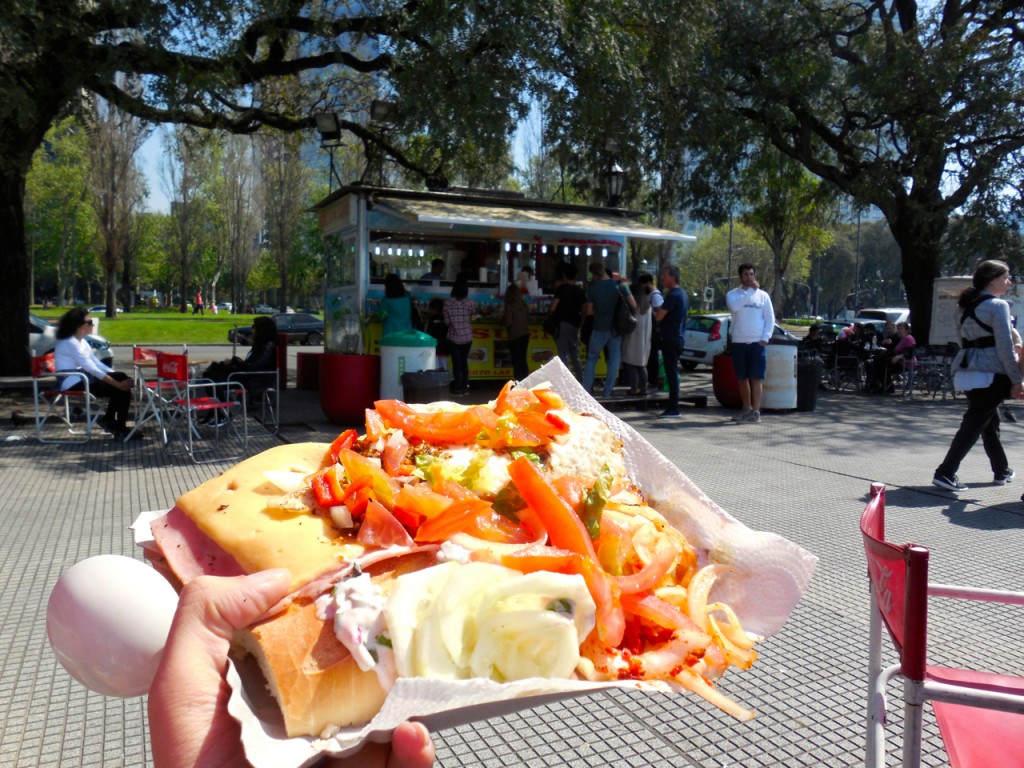 The bike tour continued through the wealthy Puerto Madero, leaded us through the government district and we stopped in front of La Casa Rosada, the executive mansion and office of the President of Argentina. On the grass in front of it we sat down to have a break and brew ourselves a fresh mate tea just like many other locals who like to come here to enjoy a picnic and the view. 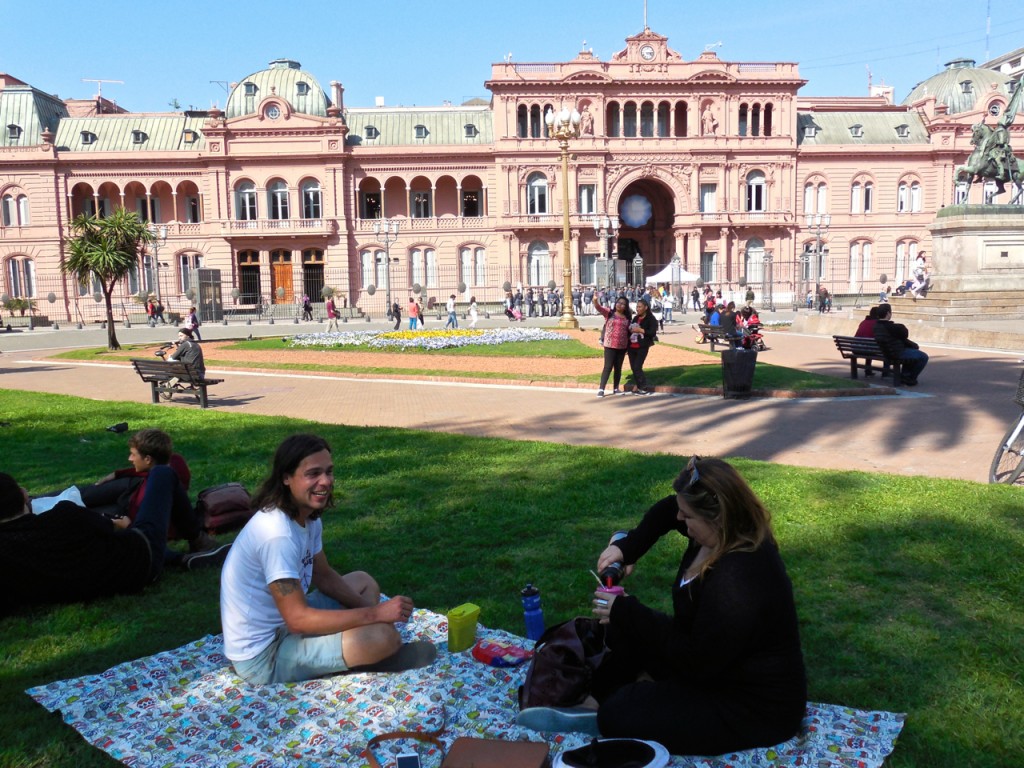 La Recoleta was our final stop on the tour. Here you will find the Museo Nacional de Bellas Artes and the famous Cementerio de la Recoleta. The beautiful cemetery contains the graves of many notable people including Eva Perón and many presidents and our guide was able to tell us some interesting stories about some of the people who got buried there. 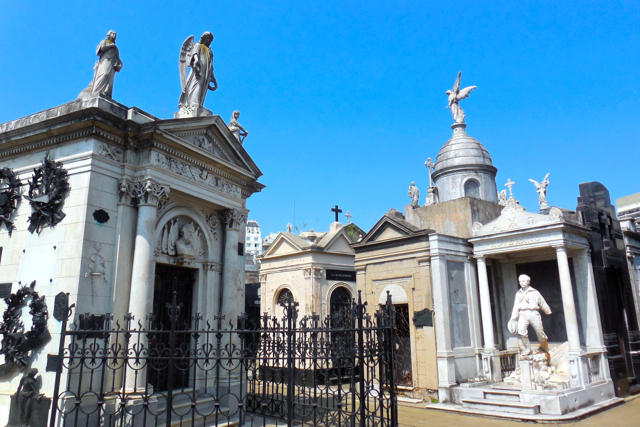 After we strolled around the cemetery for a while it was time to head back to the shop in San Telmo. It was almost 5 pm and the tour lasted 7 hours covering a total of 26 km. The time passed so quickly and since we stopped a lot of times and there were quite a few breaks included I didn’t feel so exhausted from the bike tour as I thought I would be.

After we returned the bikes our tour guide recommended us were we could go from there and actually ended up coming with us to a local craft beer brewery and showing us were we could get the best pizza in Buenos Aires.

Would I recommend Biking Buenos Aires?

I loved exploring Buenos Aires by bike. It was my highlight of this trip and I loved to see the city from two wheels. We covered everything that I wanted to see, so after that I could just take it easy and stroll around the city. What I like most of the tour was that it didn’t feel like a tour. We experienced the city like locals and the tour guide was like a friend to us. He had so much to tell about Buenos Aires and could answer all our questions (and we had many). Even if you only have a day in Buenos Aires, I would recommend you to do this bike tour. You will have a fun day exploring the city and will see much more than if you would go on a city sightseeing bus tour.

You want a discount for their tours? I got a special promo code for you. 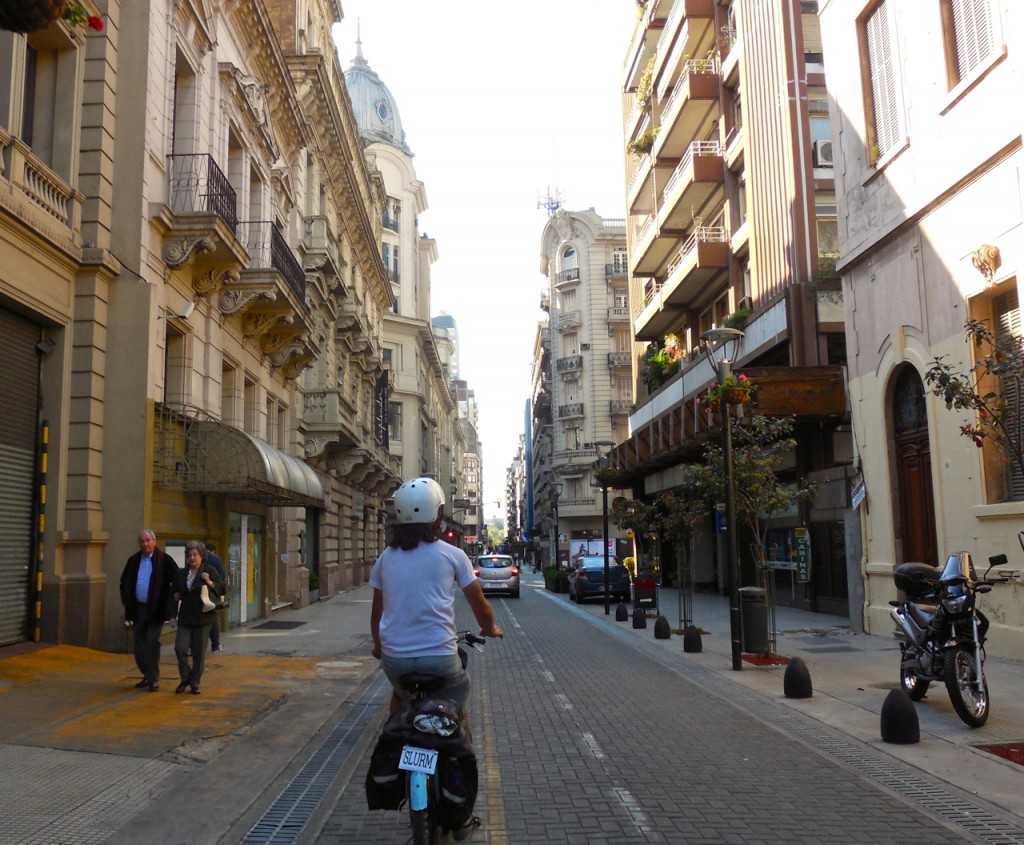 The Ultimate City Tour costs 95 $ and includes everything. I would say the tour is worth every penny, but we all like a bit of a discount don’t we?

Biking Buenos Aires agreed to give me a discount code for you guys that you can enter on their website when booking a tour with them.

Readers get 10% off by entering littletravellingdiscounts.

Airline crew will even get 20% off with the code flyblogandride. Please note that the discount code is only valid if you can bring your crew id along for proof.

Disclaimer: Biking Buenos Aires invited me on this tour. My opinion remains my own. 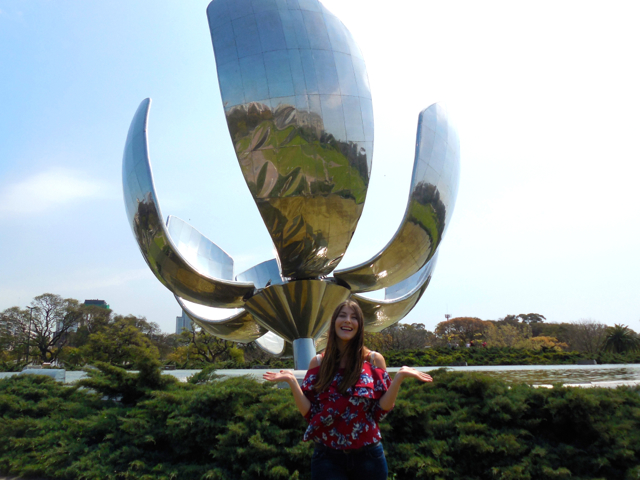 Some more impressions from my tour with Biking Buenos Aires 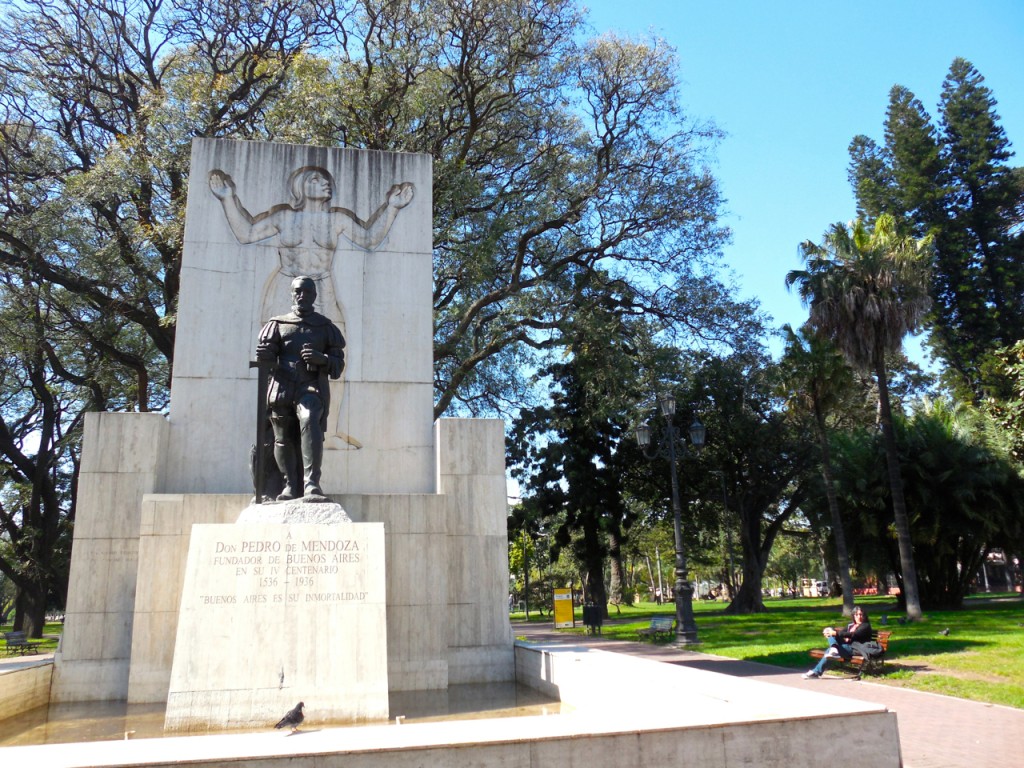 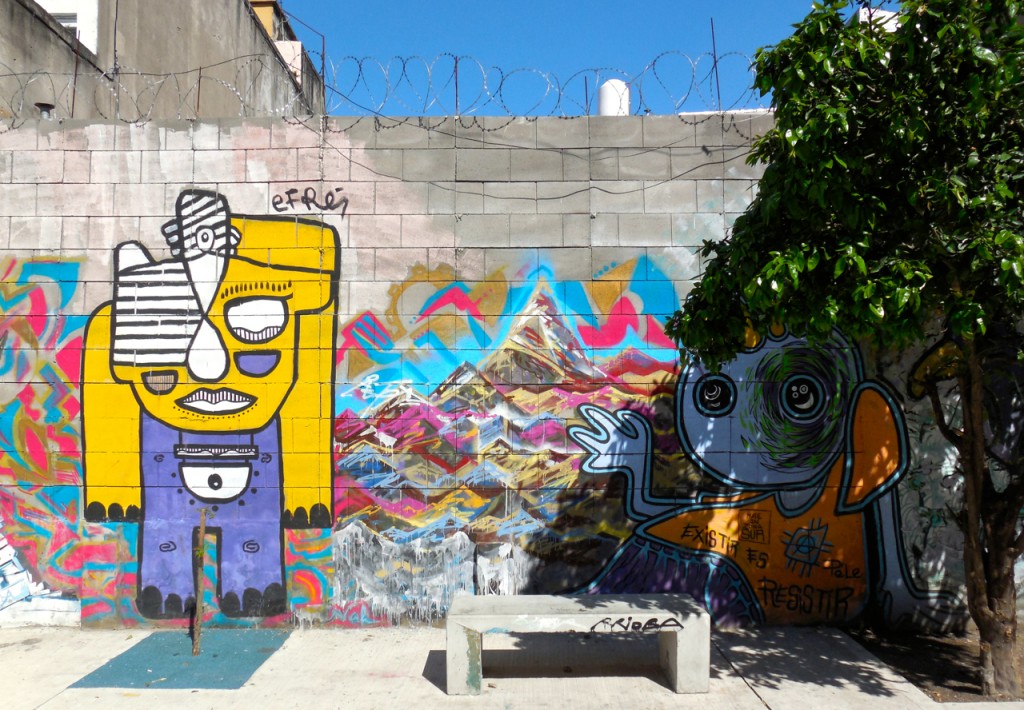 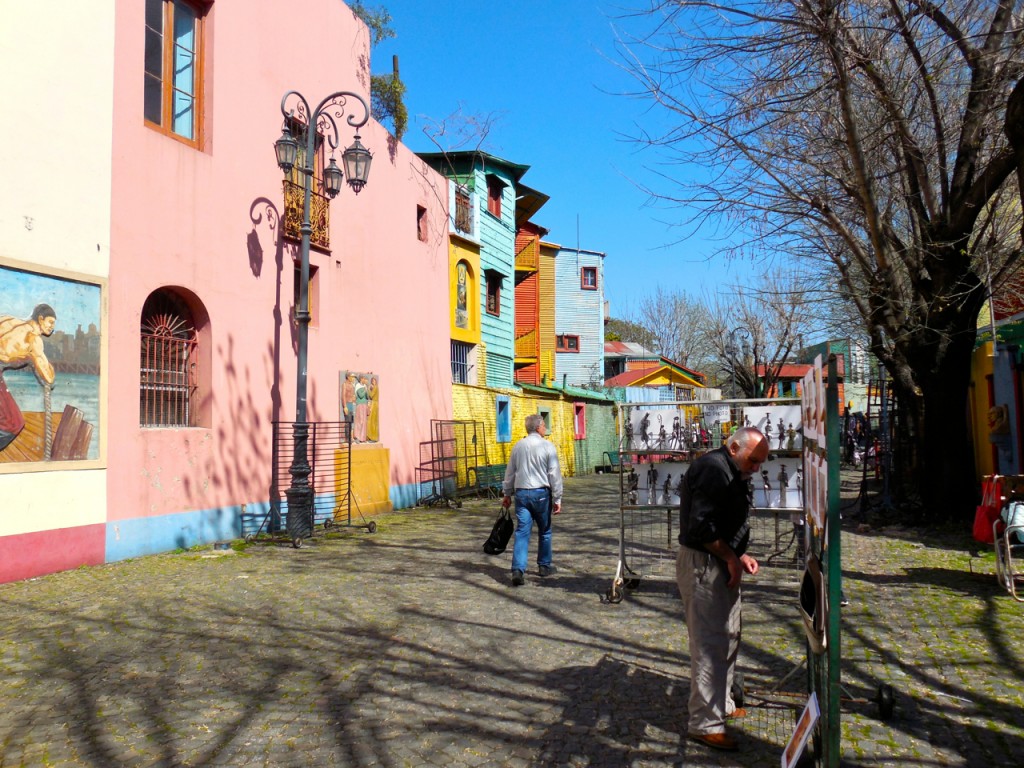 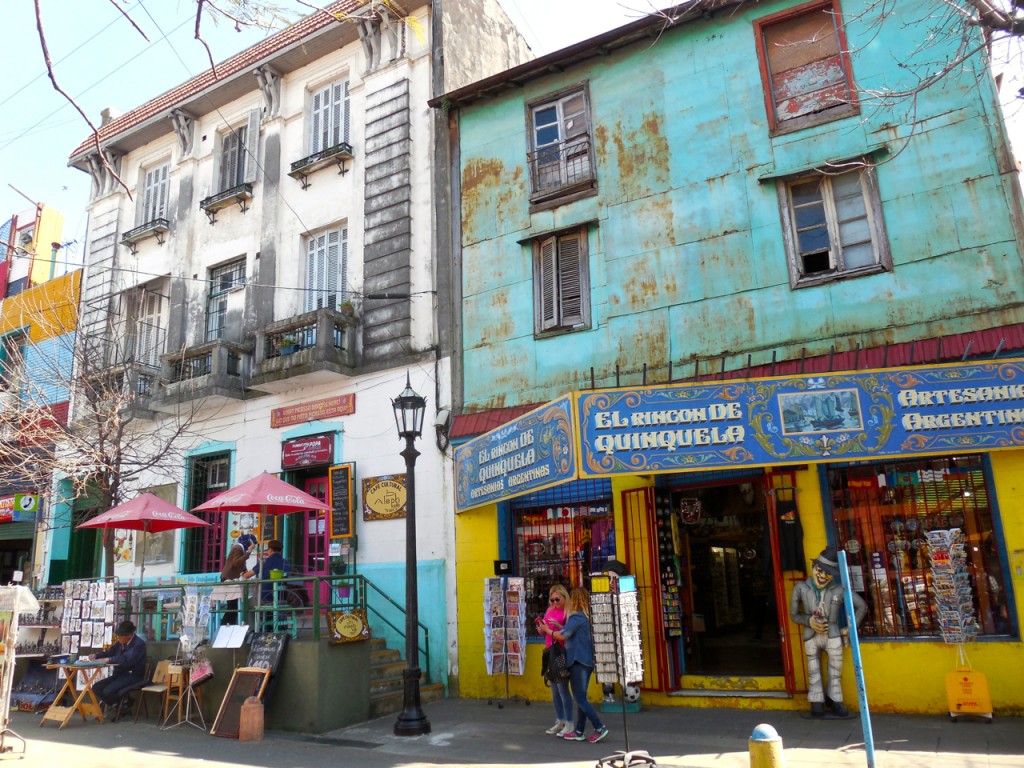 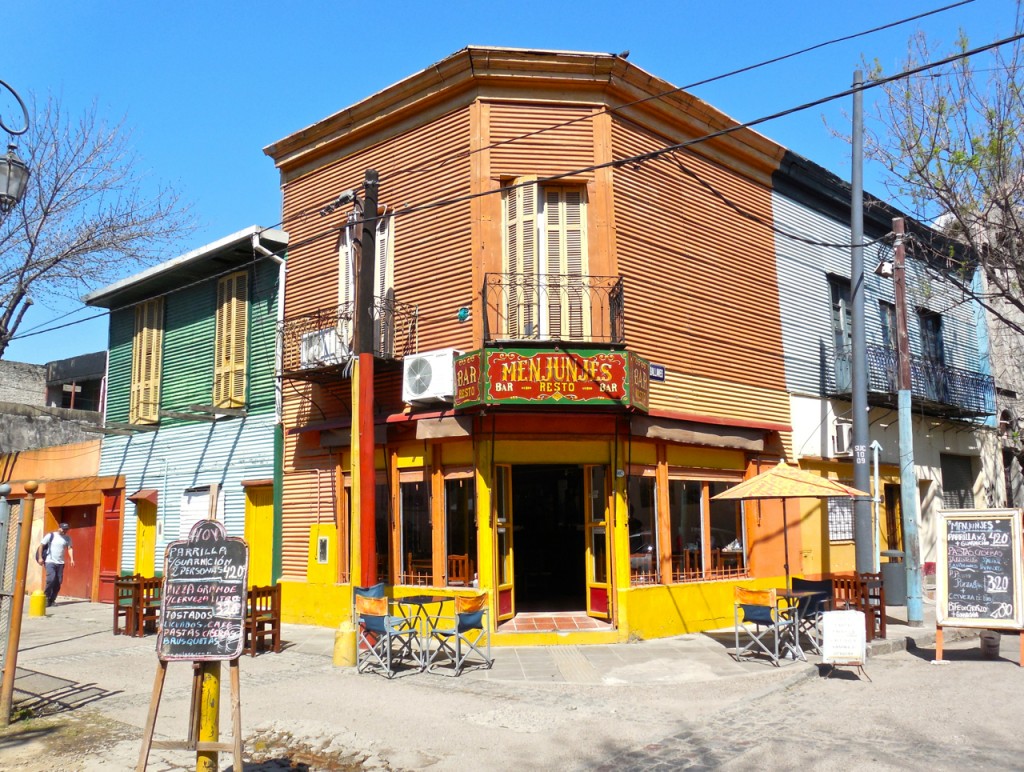 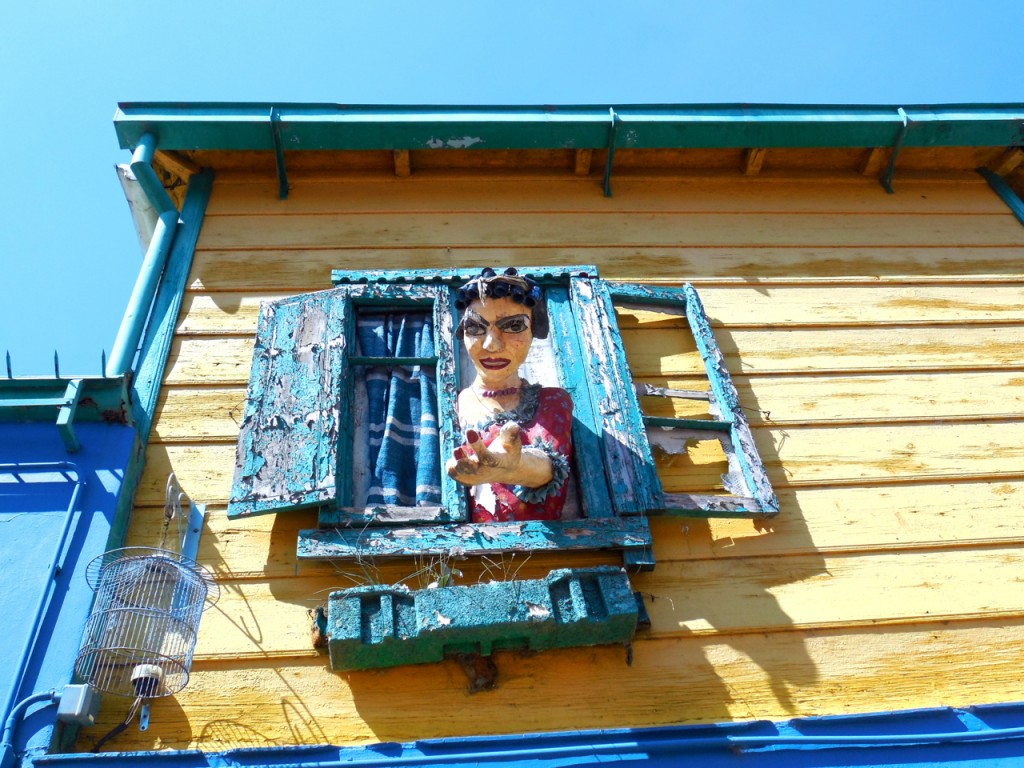 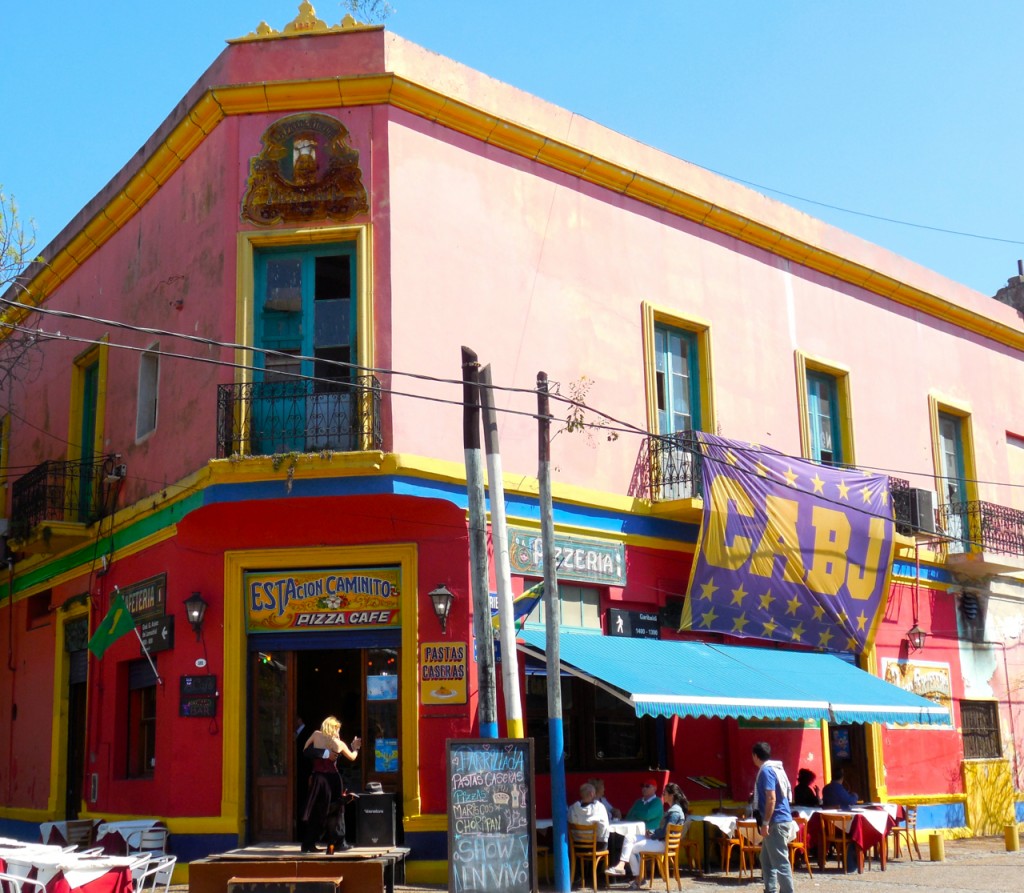 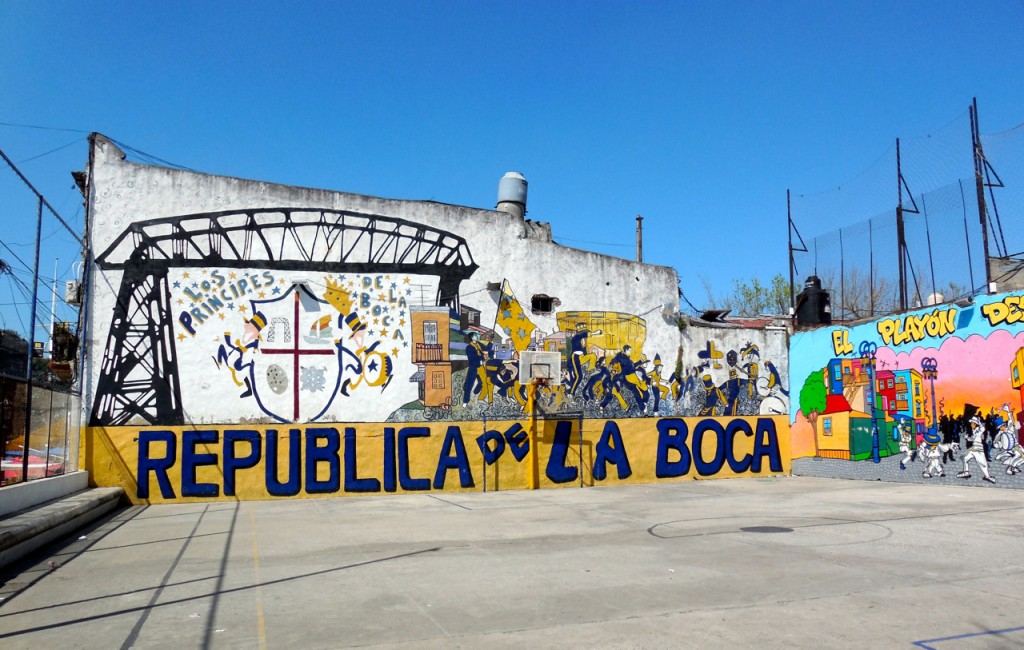 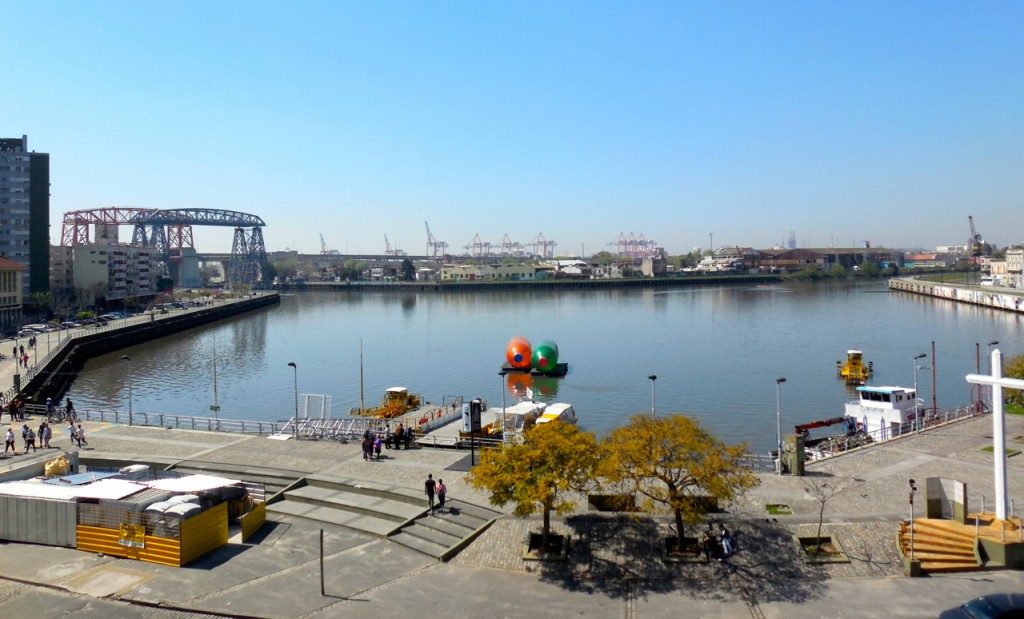 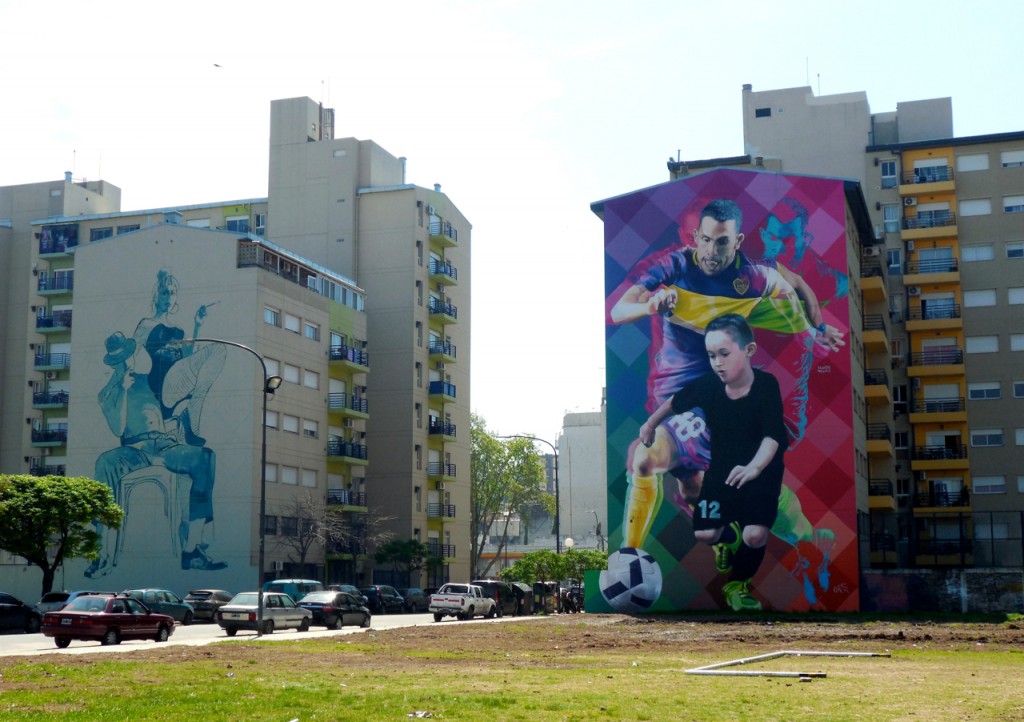 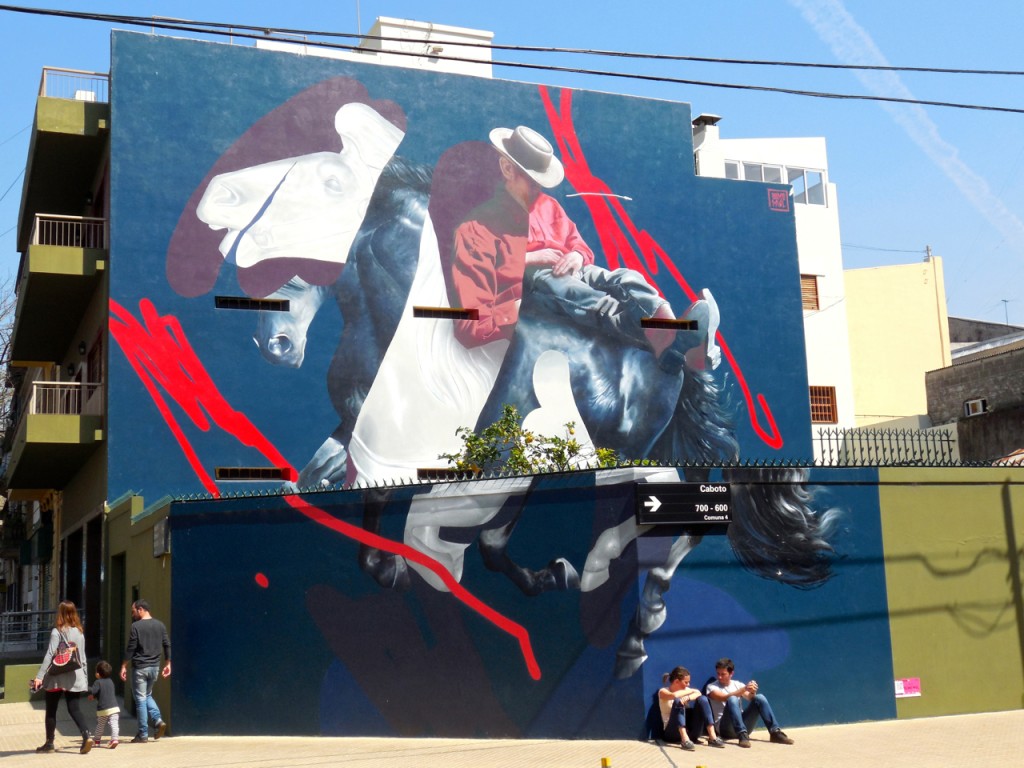 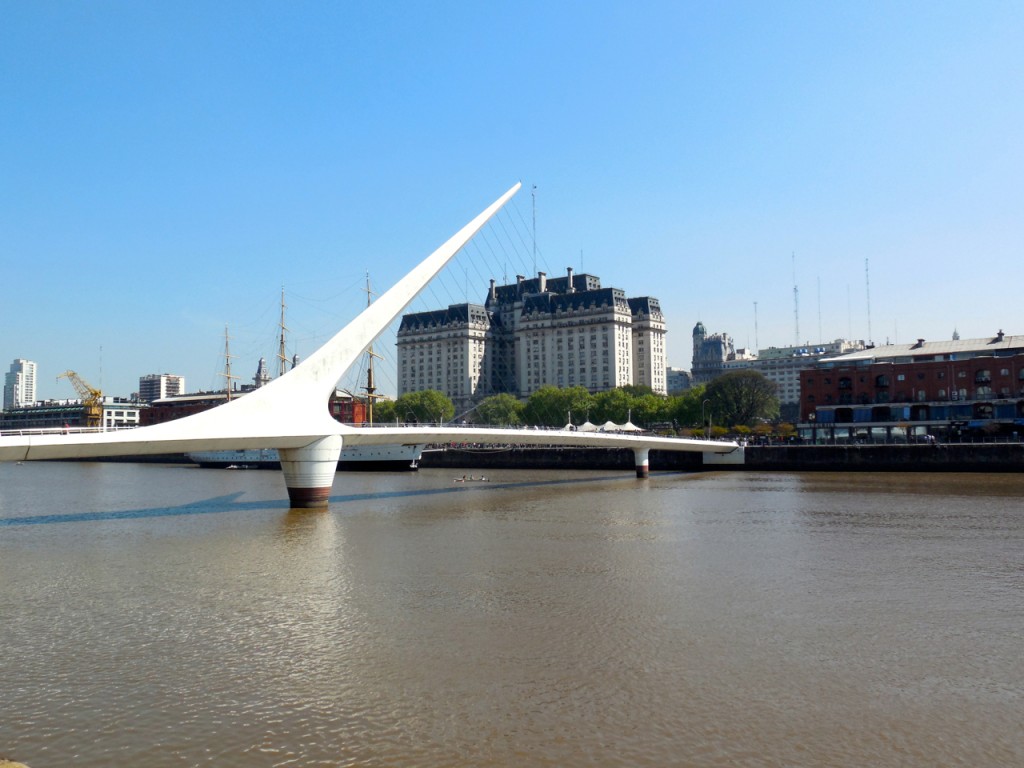 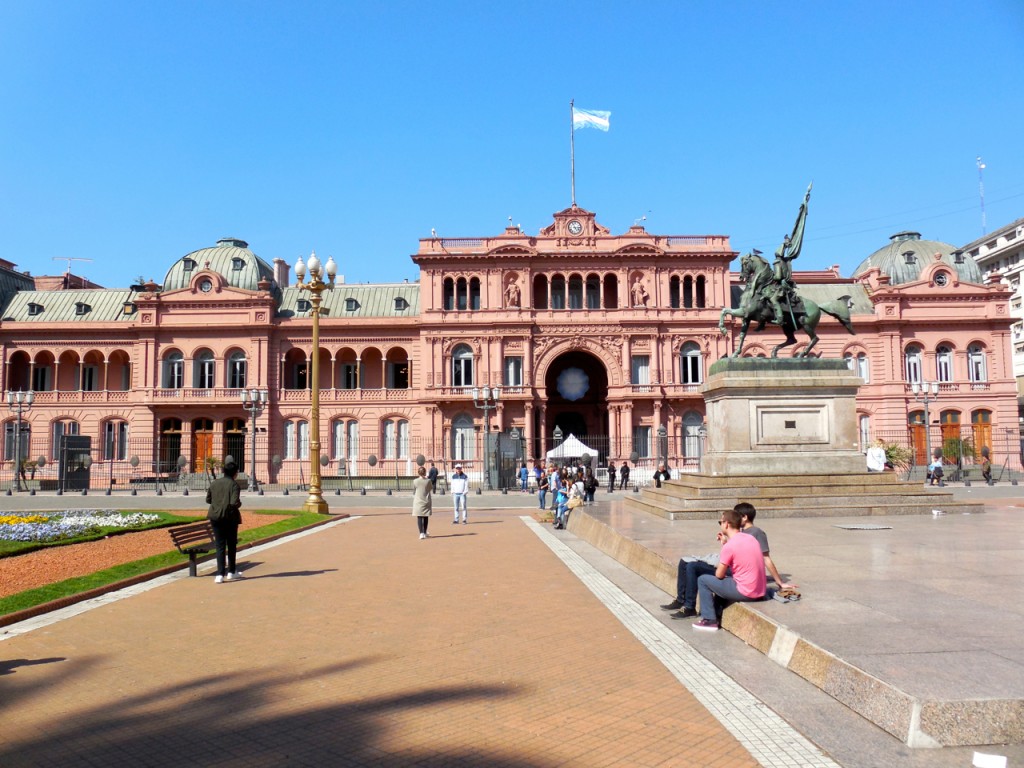 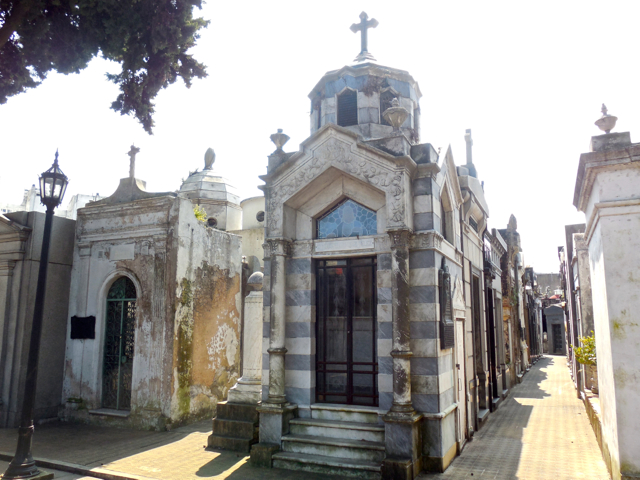 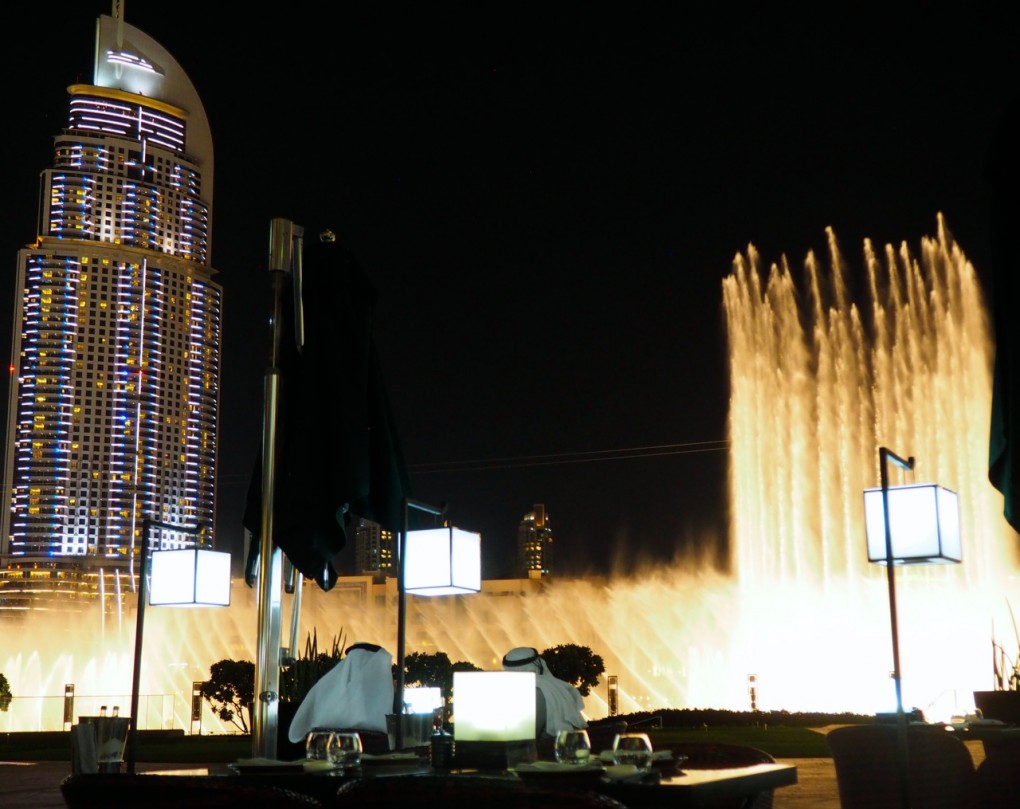 Eating out in Dubai: Armani/Hashi- Japanese food with a great view of the Dubai fountains
Dubai is the place where the world gets together. With… 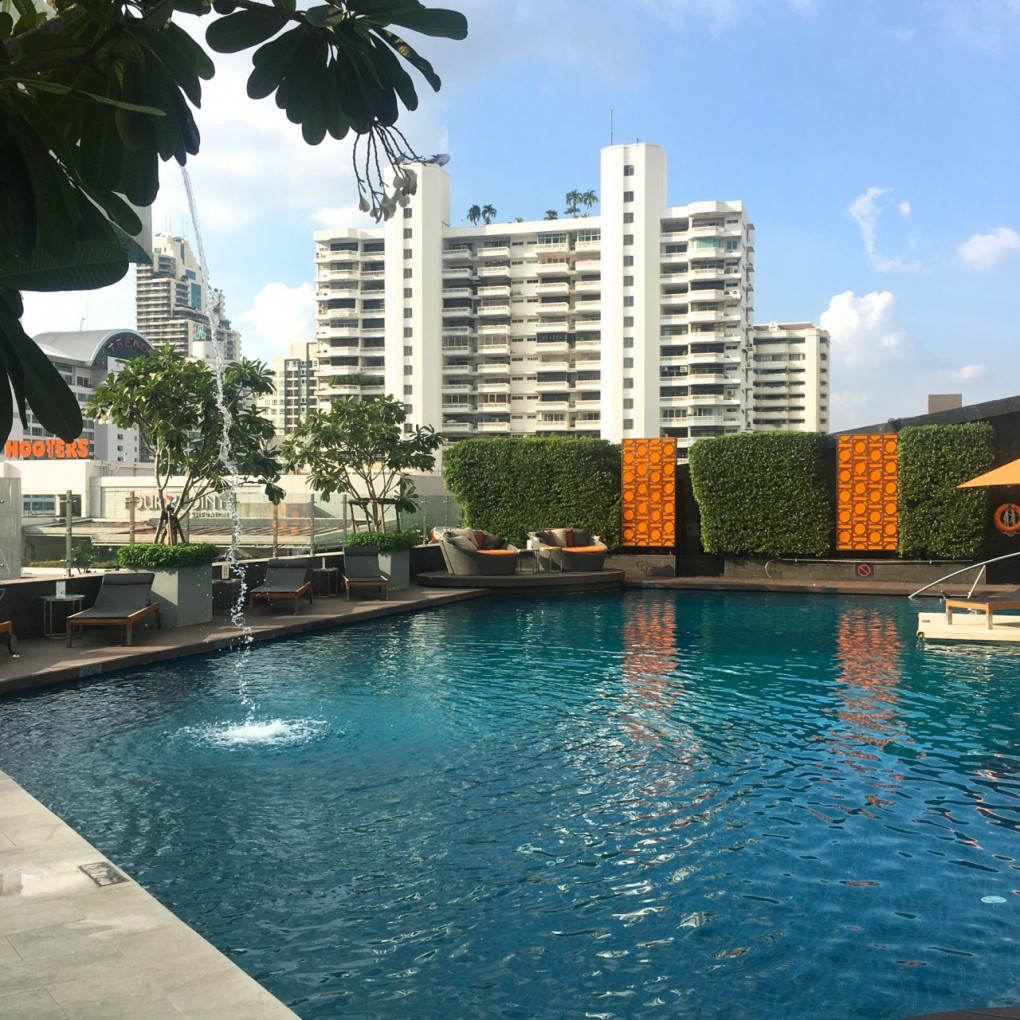 Checking In: Westin Grande Sukhumvit Bangkok
When choosing a hotel for a business or city trip… 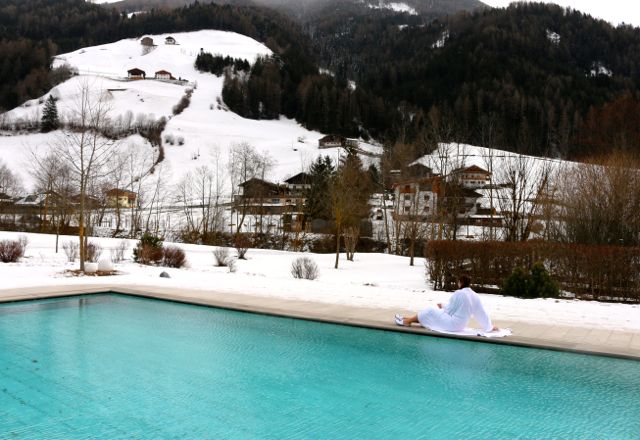 A luxurious getaway: Hotel Alpenpalace, South Tyrol
South Tyrol is a great place for all the senses.…