Actually, it wasn’t planned that I ended up in Bangkok.
After I spent some time working in Malaysia, I wanted to travel for the last month and explore and see as much as possiple.
Plan was that, I am going to meet up with a friend in Singapore and from there fly to Phuket and stay there for a week. I was really keen to get my diving certificate there and take several trips to different little islands.

But obviously things don’t turn out the way they are planned, my friend broke his arm and texted me that he probably can’t go diving. I didn’t worry to much and went to Singapore in order to pick him up from the airport. The same day I received another message, the airline he wanted to fly with wouldn’t let him fly with a plaster cast. Because he wanted to claim the money for the flight tickets back from the insurance, he told me not to worry, he is going to book a new ticket for me to Phukrz.
The next day I went to the airport and went to the counter, I gave her my booking number and she said to me “have a good time in Bangkok”. I was a bit surprised and looked up quite puzzled. “You mean Phuket, right?”
She told me, I had a ticket to Bangkok and offered me that I could change it for a fee. Because I didnt want to spend extra money I told her it’s fine. Bangkok isn’t bad either. Nothing I planned, but I am quite happy it turned out that way. While I was waiting for boarding, I was looking for a hostel and started gathering some informations on things to do there. I love spontaneousity, but first it was quite a shock. However, I was quite excited to spend my birthday in Bangkok.
After a night in a really clean and nice hostel, which was a bit further out of the city, I went into town and looked for a place around the famous Khaosan Road. The street is very popular between backpackers and offers uncountless restaurants, bars, shops, piercing studios, massage salons and a street market. The market is great to buy souvenirs or clothes and it is always a good idea to haggle, since they will always give you a higher price. Usually you can start asking them for half the price and you shouldn’t give up too quickly. Haggling is very common almost everywhere in South East Asia and it is great to get some bargains, you wouldn’t get at home.
To be honest, it is still hard for me, after spending 4 months all over South East Asia, to go to into shops in Germany and pay the full price and not start haggling.

While I was wondering around, some backpackers asked me whether I want to join them in a bar. It was quite early, but this is Bangkok after all. A typical Thai beer is the “Chang” beer and it has two elephants on the label, it is also common to order a bucket (“cocktails or mixers in a small bucket). Depending on where you go, prices can vary but are still a lot cheaper compared to Europe. So a wild night out comes way more affordable.

The people I met were a lot of fun and all of them spent quite a lot of time in Asia already, teaching English. We met again in the evening to celebrate into my birthday. First we went up to the Sky bar, which was really impressive. It is on the 67th floor of a hotel and usually you always see the end of the lights of the city, but not in Bangkok. I couldn’t see an end. The bar is a great place to enjoy the view and was also a location in the second hangover move, but drinks and food are very, very expensive. We decided to go back to Khaosan Road and I had a great evening with the people I just met the same day. That’s a reason to love backpacking.
The next morning after a nice breakfast, I got a tuktuk driver to take me to the main sights for approx. 5 Euros, before I had my flight to Phuket.

Even if Bangkok is known for it nightlife, you shouldn’t miss the old part of town, the temples and palaces and the floating market. It was really interesting to learn about Buddishm and watch a typical ceremony in a temple.
Famous sights are:
– The temple of the Reclining Buddha (Wat Pho)
– Temple of dawn (Wat Arun)
– The grand palace
– Teple of the golden buddha (Wat Traimit)
– Chinatown in Bangkok 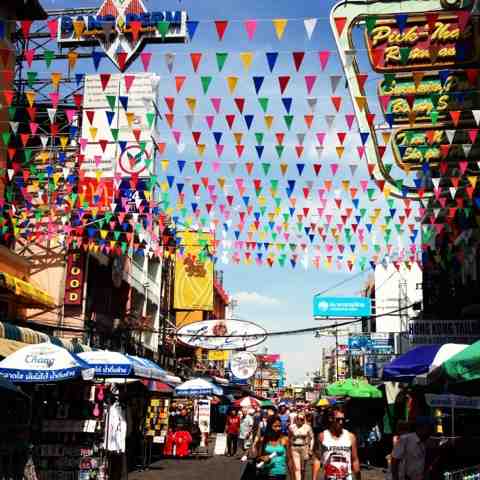 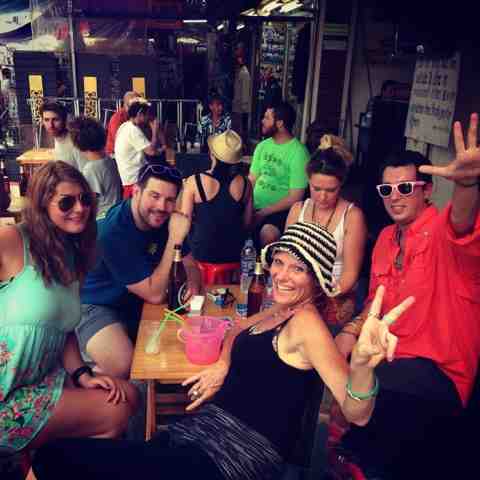 Backpackers I have met 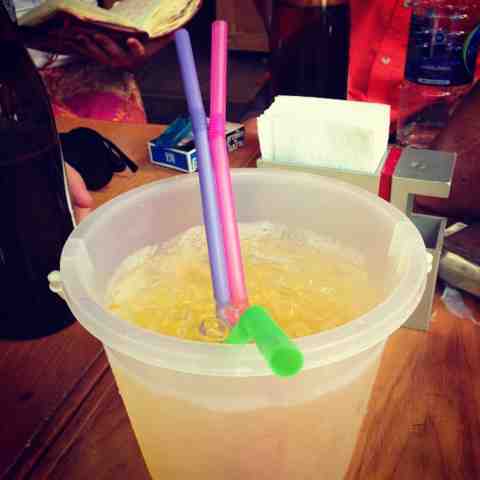 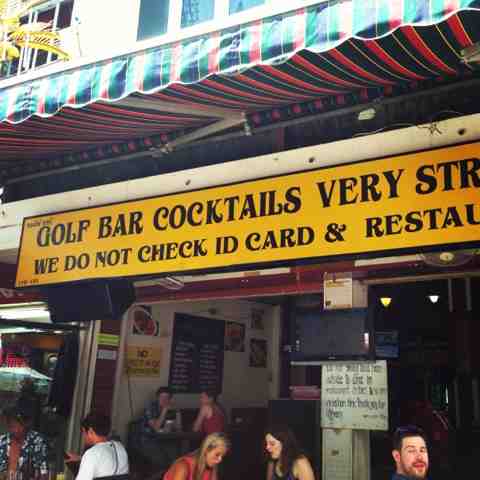 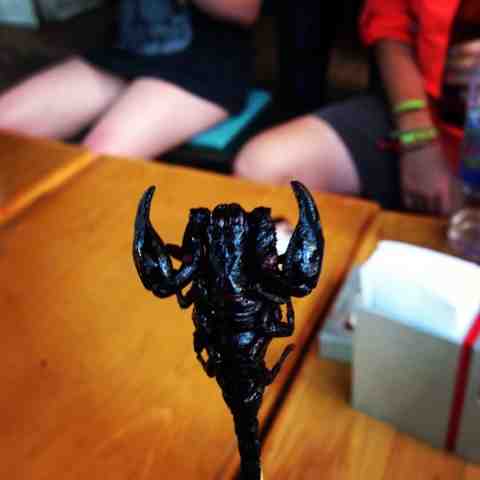 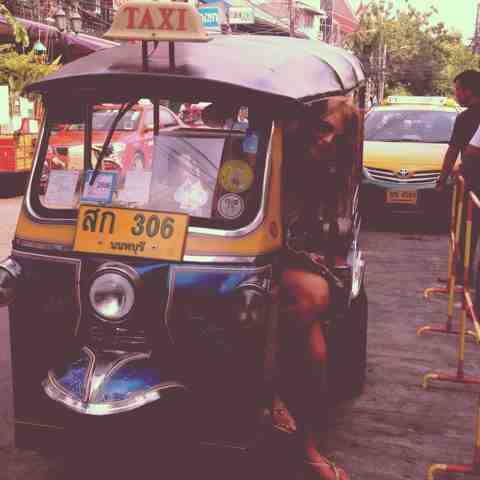 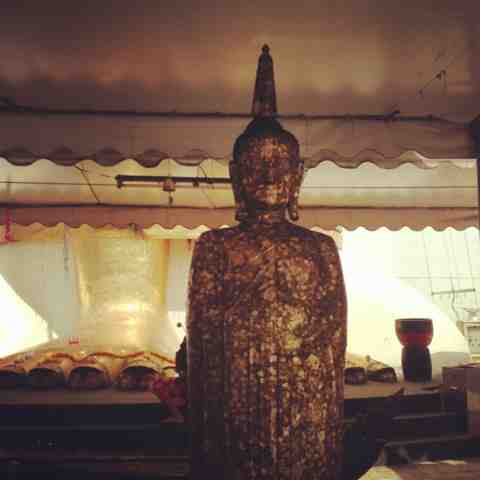 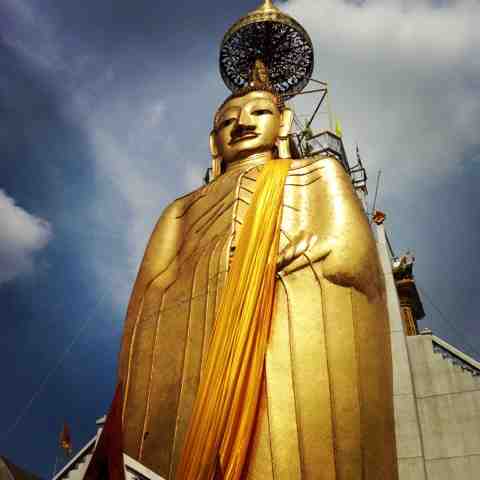 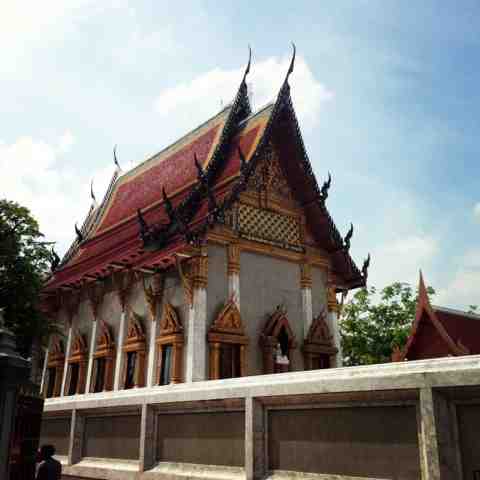 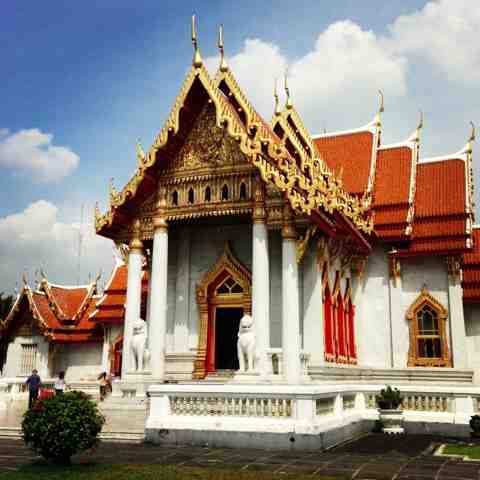 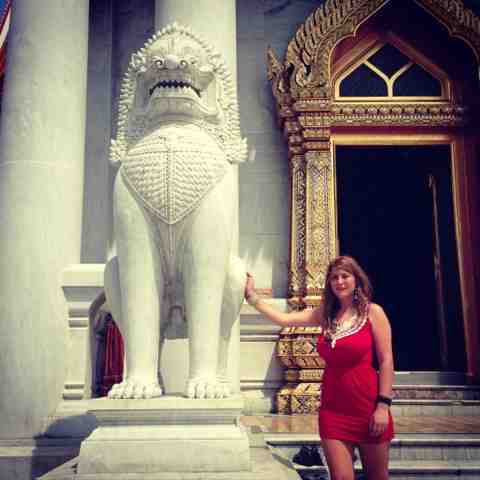 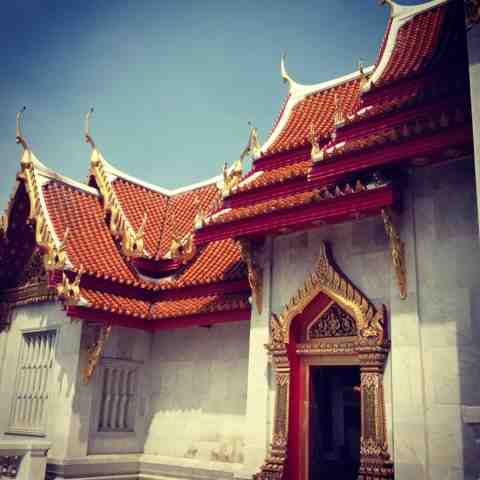 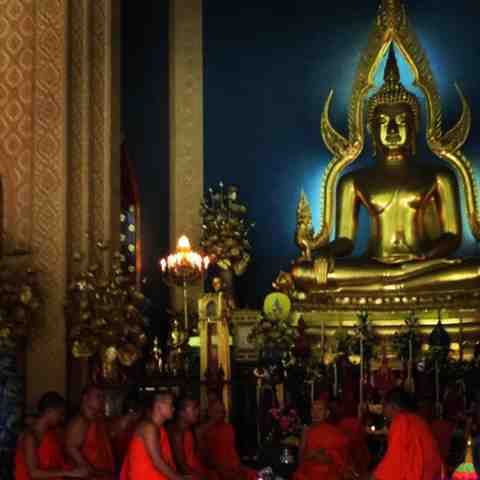 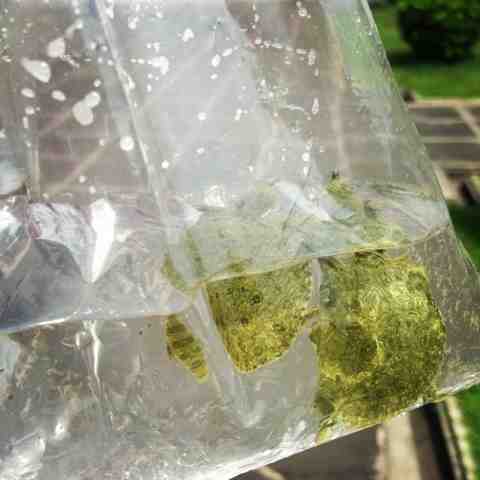 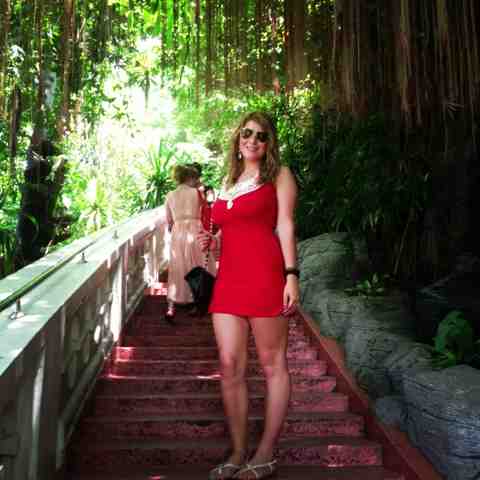 On the way to the grand palace 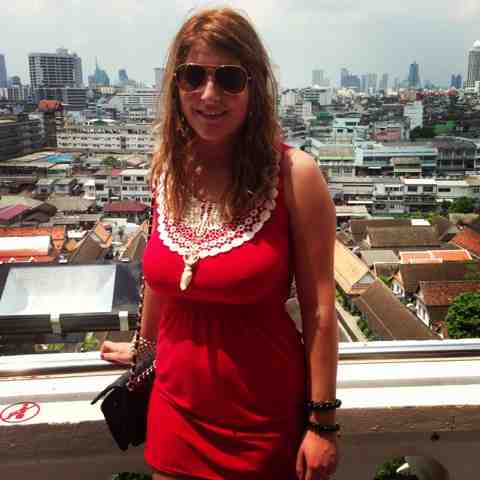 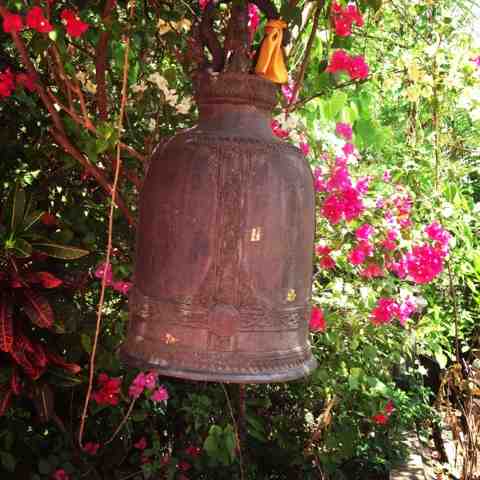 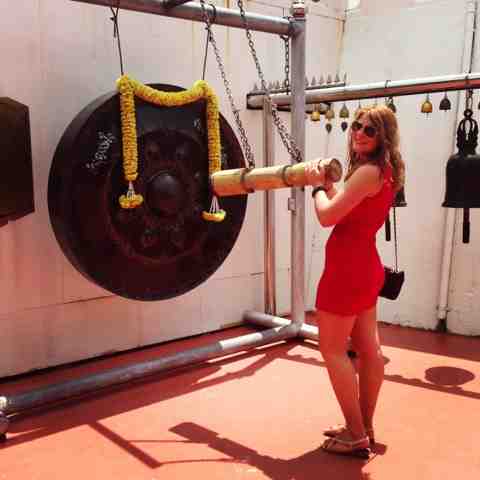 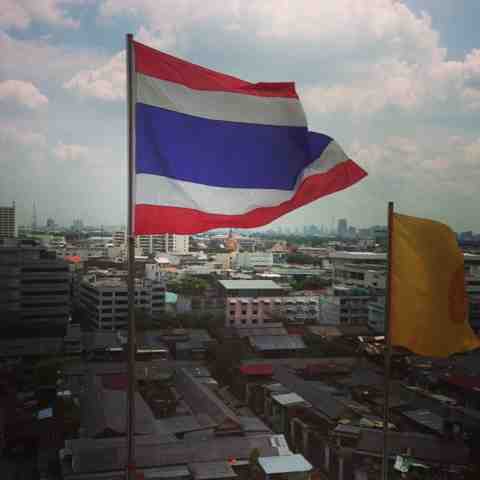 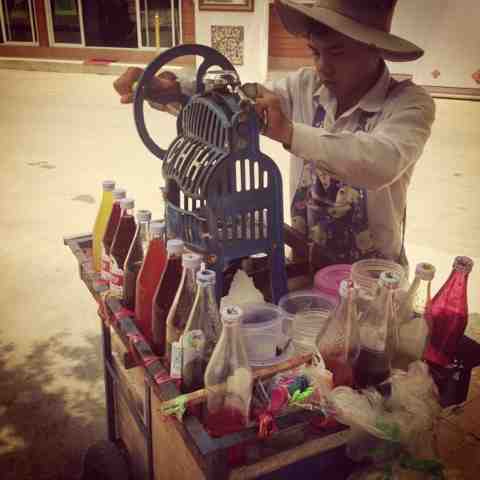 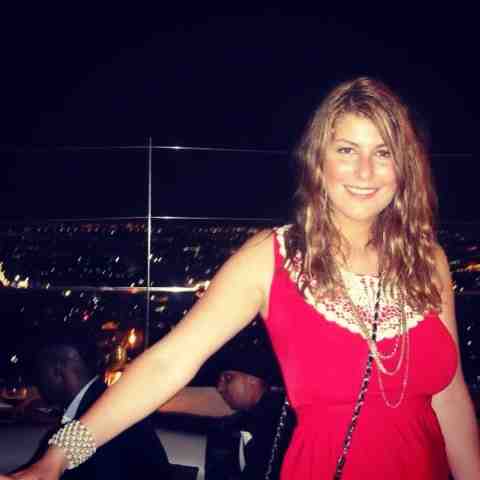 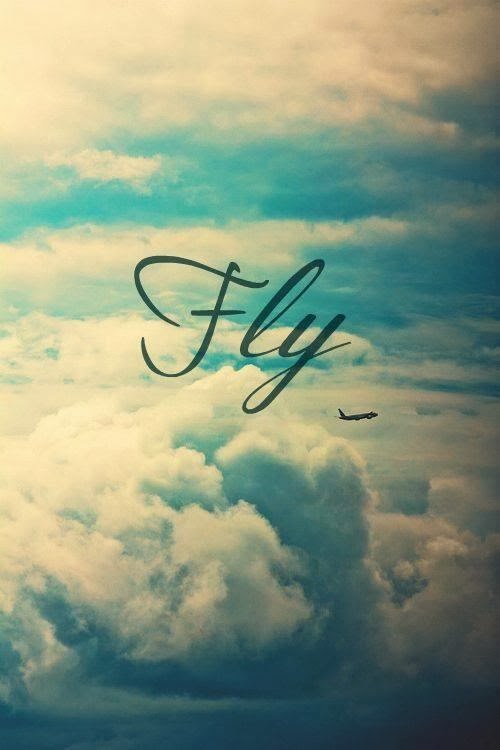 Ready for long-haul flights. First stop: Maldives
I am back…. The inspiration has been lacking for the…